This Guy Ordered a $10,000 Martini at this Storied New York Hotel to Propose

Hotels around the world have created some pretty spectacular drinks from the Bloody Mary to the Singapore Sling, but nothing compares to the $10,000 Martini at the Algonquin Hotel in New York City.

Some people would ask themselves, “Why would I ever pay $10,000 for a martini?!” Well, the answer to that question can be answered by hotel officials stating that “It’s a perfect way to propose marriage or mark any other special occasion. Nothing says love like a big rock under the olive, right?” 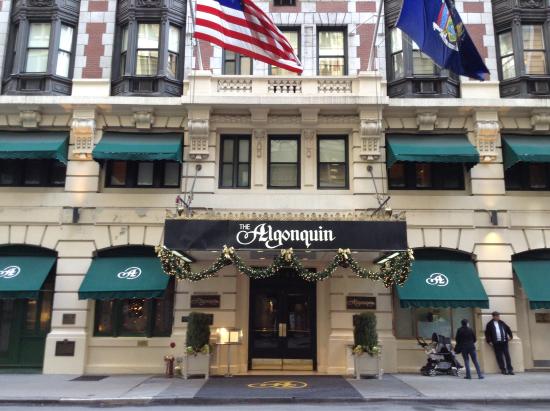 This photo of The Algonquin Hotel Times Square, Autograph Collection is courtesy of TripAdvisor

The Algonquin Hotel began a partnership with Grey Goose Vodka in 2005 and during that process, the development of the $10,000 martini was created, with the first martini being ordered that same year. The $10,000 martini is a traditional martini served with Grey Goose Vodka, dry vermouth, and green olives. The martini is served in the Algonquin’s unique Blue Bar, lit in a cool blue hue, to create the perfect and romantic setting.

Requests to order the martini can be made 72 hours ahead of serving to allow customers to come in and choose the perfect diamond to be placed in the martini glass. The diamond is chosen from the hotel’s in-house jeweler Bader & Garrin who will gladly assist customers in choosing the perfect diamond. The entire coordination of the drink can be made with the hotel concierge and bartender, so everything is timed perfectly for the grand reveal. The martini is served on a silver platter, served by a white-gloved waiter to the recipient. This photo of The Blue Bar, Algonquin Hotel is courtesy of TripAdvisor

The Algonquin Hotel opened up in 1902 and is located in Midtown Manhattan. The181-room hotel was designed by Goldwin Starrett who actually specialized in 20th-century department store designs. The hotel was originally decided to be a residential property but was quickly converted into a proper hotel. In 1919 the hotel became the meeting place of the Algonquin Round Table which was a daily meeting with a group of journalists, publicists, actors, and authors. As the daily meetings progressed and gained more and more popularity, the Algonquin Hotel became a designated National Literary Landmark. Literary figures such as George S. Kaufman and Edna Ferber were part of the literary figures who frequented the daily meetings at the hotel. Read our feature article about the Algonquin Hotel.

In 2015, Texas real-estate tycoon Garth Herro purchased a $10,000 martini at the Algonquin Hotel as a way to propose to his then-girlfriend Karen Smith Dominguez. Herro coordinated with the hotel concierge to have the diamond ring placed between the two olives on the stick that are served in the glass. Herro was able to surprise his girlfriend by having one of the servers recommend a martini to Ms. Dominguez to persuade her into wanting a drink. After the couple ordered their martini’s, the server delivered the martini in its known fashion and to the surprise of Ms. Dominguez, she immediately embraced pure joy. The hotel manager was supposedly seen so ecstatic for the couple that he gave the lovebirds a two-night stay in a suite at the Algonquin Hotel.

The idea for the $10,000 martini came about in 2005 when the Algonquin was wrapping up a massive $15 million-dollar renovation. During this renovation process, the hotel wanted to do something completely different, something so luxurious and unimaginable, but they didn’t know what, but they knew they needed some type of major press coverage. To draw attention to the newly updated Blue Bar, originally a famous bar for New York intellectuals, challenged their team to come up with an idea. Eventually, the idea dubbed ‘Martini on the Rock’ was developed charging guests $10,000 to place a diamond at the bottom of a martini.

After the Blue Bar opened and the press coverage got hold of the $10,000 martini on the menu, the Algonquin Hotel received massive amounts of press and tourism just to see the martini listed on the beverage menu. Of course, many tourists wait patiently as they sip their drinks to witness someone order this spectacular drink and to be part of a priceless moment.

7 of the Most Unique Hotel Jobs: From Mermaid Fitness Instructor to S’moreologist

This Curved Tower in Stuttgart Was Formed Without...

Everything You Need to Pack for a Trip...

Want an Internship Looking After Turtles in the...

Where to Buy a Vacation Home in Florida

Medieval Island Goes up for Sale in Sicily—and...

Where to Go for a Unique Summer Vacation

Beauty Essentials to Always Keep in Your Carry-On

The Only Hotel in London Where Cars Enter...

6 Reasons Why Sex is Actually Better in...

Stories for the Curious Traveler

Storied Hotels is a multi-platform media brand that informs, entertains, and engages curious travelers with premium story-driven creative and content that brings to life the stories that define and live between the walls and in the lobbies, lounges, and rooms of the world’s most Storied Hotels.

Discover, explore and experience the rich history, cultural connections and true essence of the world’s most storied hotels and destinations.

@2019 - All Right Reserved. Designed and Developed by PenciDesign