A Life Unlived Until it Became a Virgin: How the Virgin Hotel Chicago Transformed Chicago’s Old Dearborn Building

When we restore these beautiful old buildings we often try to return them to their glory days, to a heyday that was a seemingly never-ending flow of liquor, music, dancing, and intrigue. We try to breathe life back into these storied walls and fill them with levity once more.

For the Virgin Hotel Chicago, its restoration was not to return the building to its glory days, but to give it the glory it never got the chance to have. Through circumstances and timing, this structure was almost a thing of the past before it even had a present. Its doors were practically closing the moment they opened like the covers of a book with a beginning and end but nothing in between. Today, the Virgin brims with modern life in all its color and sound. Its lively blend of old and new starkly contrasts a beginning that almost never unfolded into more.

It Started With a Familiar Name

The Virgin Hotel Chicago certainly began with all the promise in the world but with no intentions of ever being a hotel. The lot at the corner of North Wabash and Lake Street in the heart of downtown Chicago was prime real estate in the Roaring 20’s as the Loop was in full swing as the pulse of the city. The buyer of such a well-situated lot would have to have money to spare and J.L. Kraft, the founder of the J.L. Kraft & Brothers Company that would go on to become one of America’s leading food producers as Kraft, Inc., was such a buyer.  J.L. Kraft was Canadian by birth but emigrated to Buffalo, NY and then to Chicago, where he began selling cheese out of the back of a wagon. He was quite successful, but achieved the status of business mogul in 1916 when his factory in Stockton, Illinois fine-tuned the process of pasteurizing cheese, enabling it to reach the masses by being shipped long distances. Kraft quickly amassed a fortune and, to diversify his business, founded the Lake State Bank in 1919.  Small state banks were numerous throughout the 1920’s, however there were no state-sponsored reserves to back most of them. Nevertheless, Kraft’s bank thrived and he bought the lot in the heart of the Loop in 1925 to capitalize on his success.

Kraft’s next step was to hire the famed Chicago architecture firm of Rapp & Rapp to design his bank.  Architecture was the name of the Rapp family’s game, as the firm was founded and owned by brothers Cornelius and George Rapp. Their father was himself an architect who designed many of the buildings in their native town of Carbondale, Illinois. In the building boom of early 20th century Chicago, Rapp & Rapp rose to fame by designing the city’s theaters and, eventually, theaters in many American cities. The Chicago Theater, The Palace Theater, and the Uptown Theater were three of their early successes when J.L. Kraft commissioned them to design his bank.

The Rapp brothers designed the actual building to be very typical of the Chicago style of architecture, emphasizing clean, vertical lines that drew your eyes upward at the twenty and thirty story buildings that were becoming the nation’s first skyscrapers. However, it was the structure’s embellishments that gave it the Rapp & Rapp signature style of the over-the-top flourishes that made their theaters famous. Though built by hand with sensible tan brick befitting a financial institution, the building’s first three floors were enveloped in gray terracotta with additional terracotta panels at various decorative points throughout its 27 stories. It is these terracotta panels and the façade of the first three floors that invoke the drama, creativity, and whimsy that made the Rapp brothers legendary in the theater world. Exotic birds, mythical creatures, dragons, and human faces were sculpted into the terracotta. In a nod to bank décor of the time, there are also numerous squirrels that adorn the exterior, as this ever-present animal known for it’s ability to hide away nuts mirrored the behavior of bank patrons securing away their fortunes.

The building’s interior was replete with a grand marble staircase, mosaic marble walls, terrazzo floors, and a coffered plaster ceiling with intricate carvings in the lobby, all of which reflected the Art Deco style en vogue at the time, but which was a departure from the typically more conservative style of banks. Carved bronze elevator doors in the lobby were the last outstanding touch before Kraft opened the bank’s doors in 1928. He had sunk $1.5 million of his fortune into the building and renamed his bank the Old Dearborn Bank after the fort of the same name that had been at the mouth of the Chicago River as the city was built around it. All signs pointed to the bank being another of Kraft’s success stories.

A Victim of Timing and Circumstance

Barely one year after the Old Dearborn Bank opened, the stock market crashed on October 29, 1929.  As the second largest banking center in the country, Chicago was hit hard and over 100 banks closed between 1929 and 1932. In 1931, just three years after opening, the Old Dearborn Bank was forced to liquidate its assets. They were purchased by the Chicago Bank of Commerce, which itself was forced to liquidate the following year. Throughout the rest of the Great Depression, while numerous empty office buildings around it were demolished so that the owners didn’t have to pay their taxes, the Old Dearborn Building stayed afloat by housing social service organizations that catered to women and children, including the Children’s Home Aid Society and the YWCA. It was a sad reflection of the time that this building meant to house fortunes was now devoted to keeping people alive for pennies.

Throughout the next few decades, the offices of the Old Dearborn Building were intermittently occupied by a parade of different small business owners and medical practitioners, while the ground floor that had housed the short-lived bank was rented to numerous retailers who also came and went. The beautiful gray terracotta grew dingy and those who passed the building every day soon forgot to look up in wonder at its fantastical carvings. At the start of a new decade, in 2001, the building was bought by an investor that let multiple deals slip through its fingers, with hoteliers and even colleges expressing interest and ultimately going their separate ways. Even when the building became a Chicago Landmark in 2003 nothing came about. In 2009 the building entered foreclosure, with Midwestern real estate company Urban Street Group, LLC taking over the loan in 2010 with the intention of turning the building into apartments.

At about the same time Urban Street Group was taking over the Old Dearborn Building, the internationally known entrepreneur Sir Richard Branson was looking to expand his Virgin Group empire to include hotels. These were not to be impersonal 900 room behemoths however. Branson was honed in on the brand new trend of creating intimate, boutique hotels with personal amenities, high-class cuisine and local flare. With his first hotel in Scotland a success, he set his sights on America for his second and chose Chicago after taking one look at the exterior of the Old Dearborn Building in 2011. $14 million in cash later, the Old Dearborn had become part of the Virgin family.

Virgin Group hired the Chicago architects Booth Hansen and the developer John Buck Company, another local Chicago firm, to oversee the renovation of the building and restoration of much of its unique terracotta façade. In so doing the construction group had to work closely with local Chicago historical organizations in a process that was often painstaking. The time and effort put in to the overall restoration was more than paid off, however, when a construction crew uncovered the original coffered plastered ceiling that had been hidden for decades in a ground floor drop ceiling, as well as many of the original terrazzo floors and a 1920’s era cigar bar that had been covered in debris.

Meanwhile the New York-based Rockwell Group was charged with designing the interior of the hotel in accordance with the fun and playful flare of not only Richard Branson’s Virgin brand, but the artistic soul of the Rapp brothers who originally dreamed the building to life. Rockwell’s design team took the restored cigar bar and turned it into the check in desk with Virgin’s signature red color in rich carpeting peppering the lobby. The intricately carved bronze elevator doors in the lobby were restored to their original glow and the interiors mirrored to reflect the beautiful faces within. 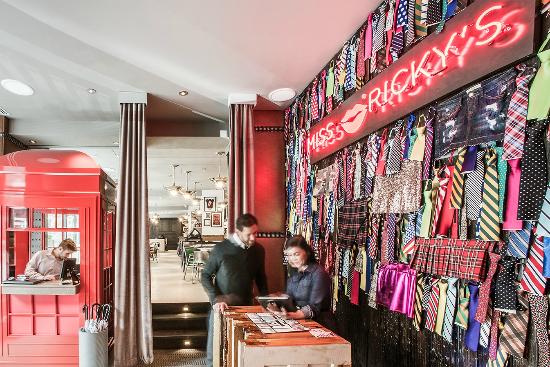 The Common’s Club two-floor lobby lounge and restaurant is the social anchor of the hotel, bringing the building to life throughout the day and night, while the Funny Library houses comedy books and toys and the Shag Room (known solely for its shag carpeting, despite its double entendre) serves as a warm intimate space to share a drink. 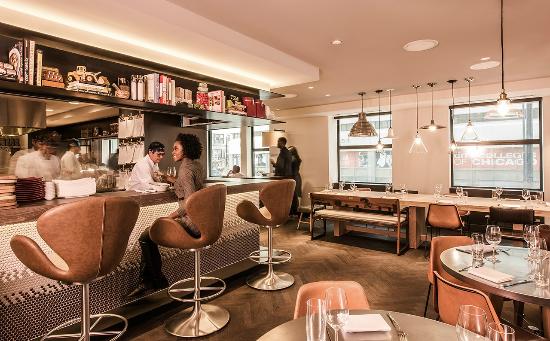 The 250 guest rooms, known as “chambers” showcase the owner’s whimsy with Virgin-red min-fridges, whose low-priced items also cater to travelers as much as the free Wifi and mobile app that can do anything from order your room service to turn on the air conditioning. 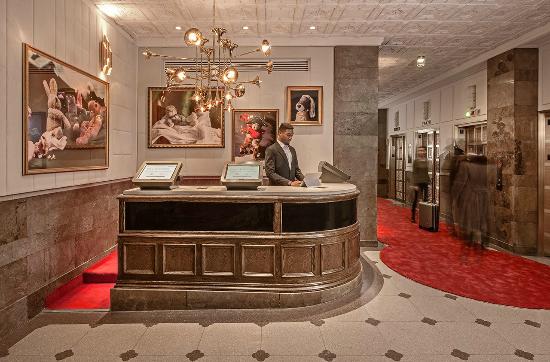 In 2015, the Old Dearborn Building was reopened as the Virgin Hotel Chicago. Like so many of Branson’s entrepreneurial ventures, it was an instant success, becoming Conde Nast’s Reader’s Choice winner in 2016 and U.S. News & World Report’s #1 Hotel in the Loop in 2018.

The hotel has brought the Old Dearborn Building the vigor and life it never got the chance to have, as every day it fills with guests and visitors living vibrant life within its walls. The building’s glory days are now, not long ago, and you can almost see the Rapp brothers’ terracotta squirrels smiling.

Read reviews, compare prices, and book The Virgin Hotel in Chicago on TripAdvisor